"Before the era of the great religions (Judaism, Christianity, Islam, Buddhism, Hinduism), the religions and ritual practices of many cultures marked rhythms and patterns of nature" (Donleavy-Johnston, 2001). Ancient cultures marked these patterns of nature and the changing of the seasons with special festivals. Even in equatorial cultures, where little change occurs seasonally, ancient people celebrated the spring and autumnal equinox and the summer and winter solstice.

The winter solstice was "celebrated in a remarkably similar manner by societies as different and as distant as the pre-Celtic stone circle builders of Northern Europe, the Native American Pueblo peoples, the ancient Egyptians and Chinese, and the Swazi of Africa" (Donleavy-Johnston). Light and its relationship to humankind were the common themes. Renewal rituals often share the dying and the resurrection of the king/savior/god and the waning light of the solstice sun. Following is a brief list of light festivals.

The Feast of Lights was held at the beginning of February. Torches and candles were carried in procession for protection against the plague, famine, and earthquakes. The festival was later adopted by Christianity as Candlemas (Cooper, 1995).

The Festivals of Midsummer occurred during the summer solstice and were associated with wild dances and fire. Bonfires burned all night to encourage the solar deity to return after its winter decline.

The Egyptian winter solstice celebration held December 25th was called the Festival of Osiris. As King of the Underworld, Osiris represented solar energy dwelling within matter giving eternal life to the earth.

A pre-Christian Persian festival celebrated the birth of Mithras on the 25th of December. According to legend, Mithraic cult figure Mithras was sent to earth by the supreme god of light to slay the Cosmic Bull which represented both world creation and redemption.

Incwala is the South African Swazi winter solstice festival; a kingship ceremony that lasts for eight days. Initially, the king represents the sun and is rejected by his people. Then, at the first full moon, the king is revitalized and symbolically reborn (Donleavy-Johnston).

Hanukkah, the Jewish Festival of Lights, is celebrated for eight days, generally in December. Hanukkah commemorates the victory of the Maccabees over Antiochus, King of Syria, and the rededication of the defiled Temple in Jerusalem. Hanukkah is closely associated with older winter solstice rites. The seven-branched candlestick, the Menorah, indicates divine presence. The candles of fat are sacred to Jahveh (Cooper).

"Light awakens us to the inner call. It is the influx of energy that penetrates,

bringing vision and knowledge, the logos of antiquity."

Past editor of Parabola magazine 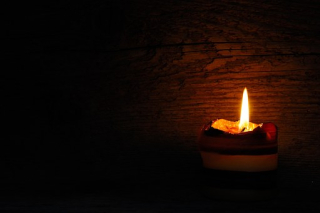 As winter nears, the quality of light is changing in Colorado.  The days are shorter and the nights are beginning to cool. We may have snow this week which is an not an unusual first snow in the foothills of Denver.

Winter festivals celebrating the winter solstice often involve the use of fire and candles as explored in an upcoming post Festivals of Light. In sandtray scenes candles, lanterns, or lamps bring light to the scene. Sandplay therapist Kay Bradway explains, "The presence of light indicates an illumination, a greater consciousness...".  As I review pictures of clients' trays, I am reminded of the scenes where light was used in the form of candles. The placing of lighted candles or the use of lanterns often indicated the need for or the demonstration of some form of enlightenment. After lighting candles, clients may have requested to dim the therapy room lights. In the half-dark, the sandtray took on an even more numinous and sacred feeling.