Alchemy – symbol of the nigredo of the prima materia, related to initial stages and to the instincts and “has consequently been considered a symbol of the perilous aspect of the unconscious and as an attribute of the man who is cruel and crude“ (Chirlot, 1995, p. 23)

Amerindian – symbol of immortality, The self-existent as it dies and rises again; supernatural power; strength; the whirlwind 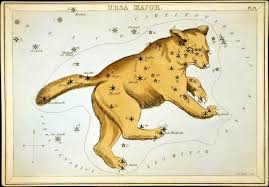 Astronomy – either of two constellations in the northern hemisphere, Great Bear or Little Bear

Christian – symbol of evil, cruelty, greed, carnal appetite; on Norman churches represents Satan; battle between David and the bear symbolizes the triumph of Christ over the forces of darkness

14th-century shield with the arms of Berne

Greek – sacred to Artemis, virgin goddess of the hunt and the moon; the priestesses of Artemis Brauroneia (Athens) were known as she-bears and were concerned with times of transition for women; sacred to Athena, goddess of the hunt; attribute of Atalanta and Euphemia; Atalanta was nursed by a she-bear, for Aristotle, the bear symbolizes silliness

Japan – benevolence, wisdom, strength; for the Ainu people (who live in the north of the Japanese island of Hokkaido and the Kuril Islands) the bear is a mountain deity, culture hero, and devine messenger

Norse – in myth, Odin appears as the bear Björn

Persian – symbol of the foolhardy, powerful, and rich enemy

Roman – sacred to Diana, goddess of the hunt, woods, forest, and moon

Twin Ursae – nurses to the infant Zeus; associated with children and the bear-mother-cult; evolved into the two biblical she-bears called by Elisha as avengers to maul the boys who mocked him (II kings 2:24) 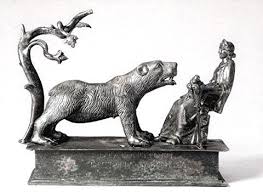 In addition to beings noted on other posts related to Bear Symbolism, here are a few more:

Aleyin – Phoenician god of clouds, wind, rain, spring; son of Ba’al, brother of the goddess Anat; depicted as the rider of the clouds, he is accompanied by eight wild bears

Artio – the sacred Celtic she-bear of Berne in Switzerland; the goddess of wild game, worshiped by ancient Helvetians; goddess of the “bear sark“ or bearskin shirt worn to give warriors strength and courage

Callisto – Arcadian, Pre-Hellenic, Greek goddess; depicted in animal form as a mother bear; her symbol is this she-bear

Ga-Oh – Huron, Iroquois, Seneca, North American Indian great Spirit of the Winds, the giant who controls the bear; Seneca Indian Spirit of the north wind who helps a young boy become a swift runner to win a race with bear – in the end the bear offers his life to the boy

Glispa – Navajo Indian culture heroine; one of two sisters who married Bear; she created a shamanistic dance to cure sickness

When looking for understanding about bears used in sand tray scenes, it is helpful to understand a bit of the psychological symbolism of bears.

The “destructive side of the mother archetype (the hand that feed can also withhold)“ can also appears in myth “as the she-bear who drives away her young and leaves them to starve in the wilderness” (Fontana, 1993 p. 16).

“In psychology, for example in dream symbolism, the bear is interpreted as an embodiment of the dangerous aspect of the unconscious; Jung, the bear often represents the negative aspect of the superposed persona” (Biedermann, 1993, p. 33).

In Jungian psychology, the bear may represents danger caused by the uncontrollable contents of the unconscious. 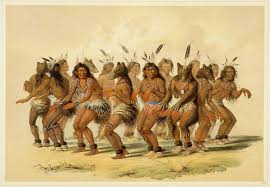 Bear Ceremony Delaware, Northeast - Ten-day winter ceremony; the Linkan Men’s Dance, a fast moving dance about a group of boys that danced themselves into the sky and became stars, is done on the 5th night; the Pickwelaneokan or Nighthawk Dance, a dance of thanksgiving and petition for health, is performed on the 10th night

Bear Dance - Performed by members of medicine societies for curing purposes; also as a petition for long life; dancers often wear bearskins and masks; most bear dances imitate the shuffling or waddling gait of bears

Bear Medicine Woman  Pawnee, Plains - Imbued with the spirit of the bears, Bear Medicine Woman performs healing ceremonies using songs and bear growls; she inhales power from the sun; she breaths different color breaths on wounds for four days; she originated the bear dance, which is part of the Bear Medicine Ceremony

Bear Parent Kuteni, Plateau - A myth about a female bear who raises a lost boy with her cubs; she gives the boy the power to hear his people singing and praying in his village; she also teaches the boy to separate sincere prayers from insincere prayers; the boy returns to his people and tells them that bears know how to tell the difference between sincere and insincere people

Bear Sweat Lodge Ojibwa, N. east, Subarctic - Ceremony performed by bear visionaries or those who have dreamed of the bear; an intense ordeal that bestows great honor on the visionaries, the heat is much more intense and the time spent in the lodge much longer (Gill & Sullivan, 1992)

Bear Woman Pueblo, Southwest - Yellow woman who becomes a bear; corn women or maiden heroine of many stories who may appear as a kachina mana and sometimes takes on the identity of a bear 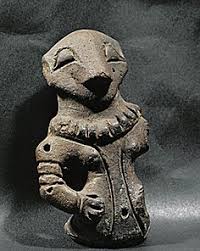 Throughout the northern hemisphere, the bear has symbolized strength and majesty as well as motherhood. Myth and folk stories tell of the bear as ancestress and mother life-giver. Ceremonies and rituals related to the mother bear have been enacted throughout the centuries. Some are still in existence today. Bear worship is also evident in ancient reliefs, figures, and vessels.

The Slavs held bear feasts up until the end of the 19th century. A meal was prepared on Saint Andrew’s Day (November 30). The meal consisted of grain, peas, corn, and beans. A portion was thrown into the fire while someone wished good health to the Grandmother Bear (Gimbutas, 1989, p. 116). The Belo Russians (east Slavic) believed a bear brought good luck to the village and would set out honey, cheese, and butter. Bulgarians lead bears into their homes to bring luck, healing, and to ensure fertility. Until the 20th century, newborns were laid on bearskin rugs near their grandmother.

“In contemporary Greece, vestiges of the worship of the Mother Bear can be found. In the cave of Acrotiri, near ancient Kydonia in western Crete, a festival in honor of Panagia Arkoudiotissa, 'Virgin Mary of the Bear’ is celebrated on the second day of February“ (Gimbutas p. 116). Greek myth tells of Artemis’ ability to shape-change into a bear. During festivals, Athenian girls danced as bears. In the sanctuary of Artemis, a frieze shows the lead female dancer with a bear mask. Indications of similar ceremonies appear on a limestone relief in Istanbul showing the figure of a bear-masked dancer.

Bear cult figures come in many forms. Evidence of bear worship is found in art from the Neolithic Vinca culture in southeastern Europe. Simple terracotta figures of women wearing bear masks and holding a cub or wearing pouches on their backs are believed to represent a mythical Bear Nurse and date from the 5th millennium B.C. Other artifacts related to bear worship, in the form of a bear-shaped vessels, were created from the 7th to the 3rd millennium B.C. These containers have four legs, a bowl, and ringed handles and are decorated with bands of short, triangular, line designs. 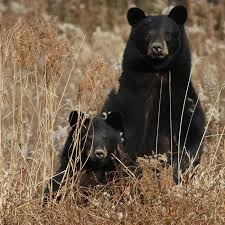