Raven appears in Northwest Coast and Arctic story cycles as a trickster who is responsible for assisting humankind. He is responsible for bringing light to the dark world, creating and transforming of parts of the earth, naming plants, and teaching animals. Raven is also known for being deceptive and untrustworthy. Following are stories about Raven.


Tsimshian - southeastern Alaska and British Columbia
The parents of a dead boy invite all the animals to their sons wake. The boy's father, who is the chief, orders the boy's intestines to be removed and burned. Upon visiting the boy's body the next morning, the mother finds a young man, bright as firelight. The young man becomes ravenously hungry, eating everything in sight. The chief sends him away from the village with a blanket decorated with raven feathers. He puts on the blanket and flies over the sea. He cannot see because ma, a copper disk, is hidden away. The young man disguises himself as Raven and steals the copper disk. When the other animals refuse to share their food with Raven, he breaks ma in a tantrum and light comes to the world.
Tanaina - sub arctic
Raven, known as Guguyni, releases the sun and moon from captivity so the people can see.
Nooksak, Salish - northwest United States and British Columbia
Raven was watching the children of the North Wind People, the supernatural guests who visit villages and bring the snow. Raven carelessly lets one of their children fall into the fire. When the North Wind People learn of this tragedy they leave the village quickly. This tale explains why the winter always leaves so suddenly.
Nootka - Vancouver Island and Olympic Peninsula
Raven learns that Crow, who owns the fresh water, will not give anyone water unless she is paid. Many people are dying of thirst. Raven meets with the chiefs who will make Raven chief over all of them if he will get the water. Raven goes to Crow’s house and pretends to be dying of thirst. Crow lets Raven in. He casts a sleep spell on her. Raven then tricks her through humiliation and demands that she give him water. Crow then goes to the box where she keeps the water. Raven tips the box over, letting the water flow over the land forming a lake and a stream. Raven then takes some of the water and flies all over the world creating rivers.

In mythology and lore, birds are frequently used to symbolize the human soul and spirituality. Birds have transcendent powers and are associated with deities and humans. Similar in symbolism to angels, birds represent thought, imagination, and swiftness of spiritual processes. In myth and folktales, birds are often intelligent collaborators with man and are bearers of celestial messages. Associated with air, birds symbolize loftiness of spirit.

The Bird Man, a Maori symbol of the divine, is the all-seeing and the all-wise. In Hindu myth, birds are a symbol of higher states of being. In the tree of life, as described in the Mirach, Mohamed observed brightly colored, singing birds who were the souls of the faithful. The Egyptian hieroglyphic symbol of Ba (the soul) is a bird with a human head and represents the idea that the soul flies from the body after death.

Two headed birds generally symbolize alternating contradiction, positive and negative aspects, and harmonious ambiguity. The two-headed eagle is an attribute of twin gods, symbolizing omniscience or double power. The two-headed eagle also represents Nergal, the Babylonian solar deity, and the fierce heat of the summer and noon sun. The three-legged red crow is the Taoist symbol of the solar and yang principle and represents the Great Triad – Heaven, Earth, Man.

Birds in myth are often associated with the sun, wind, storms, and fire. Eagles and swans are the Vedic symbol of the sun. North American Indian myths describe birds as the mythic personification of lightning and thunder. The Swedish mythological Hraesvelg represents the storms and the wind created by beating its enormous wings. Garuda, the eagle, is the Hindu bird of life symbolizes the sky, the sun, and victory. Garuda is the creator and destroyer of all; a solar bird on which Vishnu rides. He is the emblem of Indra and the wielder of vajra, the thunderbolt.

The Phoenix is the universal symbol of resurrection, immortality, and of death and rebirth by fire. An emblem of solar and fire worship; the Phoenix lives a long life, burns itself to ashes, and comes to life again. Purple and red are the predominant colors of the Phoenix. Named by the Phoenicians, the word phoenix is derived from fo-en-ix - one great fire

The Phoenix is also the emblem of the Chinese Empress and is called feng-huang. In Japanese myth, the Phoenix is called Ho-wo and is the symbol of the entire world; its back the crescent moon, its wings the wind, its feet the earth, and its tail the trees and plants.

The negative symbolism of birds is typified by the harpy or harpyiae; the dark, destructive aspect of the great mother. Associated with sudden death, whirlwinds, and storms; the harpy is depicted as a death demon. However, in heraldry, the harpy carries no sinister association. The harpy signifies ferocity under provocation. 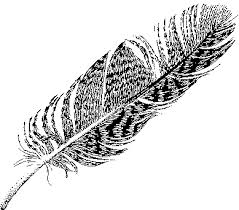 Feathers: associated with the wind and the creator gods of the Egyptian pantheon; corresponds to the element air and the realm of birds; symbol of the truth which must rise; represents speed, space, flight; worn as personal adornment in cultures with aerial myths; worn as a headdress, the wearer takes on the mana or power of the bird; the white feather symbolizes clouds, seafoam, and cowardice

Claw: symbol of ferocity, greediness, debasement in sensuality, misuse of reproductive powers; positive association with construction and usefulness as nests are built with the use of claws

In general, birds commonly represent a spirit, the soul, transcendence, thought, and imagination. Large birds are often associated with solar, thunder, and wind gods. More specifically, individual species have their own symbolism. Following is a brief look at individual birds.

Blackbird: Christian symbol of the temptations of the flesh, the devil appears as a blackbird to Saint Benedict

Crane: allegory of justice, longevity, and the good and diligent soul; Chinese symbol of the solar, yang, good fortune; a messenger of the gods; able to enter into higher states of consciousness; in Japan, known as the Honorable Lord Crane, believed to act as intermediary between heaven and earth

Crow: being black in color, represents the idea of the beginning, maternal night, primigeneal darkness; considered a messenger; North American Indian symbol of the great civilizer and the creator of the visible world; in Roman and Greek myth endowed with mystic powers, believed to be a seer of the future; Chinese symbol of yang when drawn in a solar disk with three legs, each leg representing the first light of day or rising sun, zenith or midday sun, and sunset or setting sun; when paired with the white heron, a symbol of yin-yang, in alchemy, called the nigredo, represents the first stage of matter in the Great Work; in Shintoism, messenger of deities and associated with temples

Dove: symbol of spirituality, life spirit, the soul, innocence, peace; sacred to all Great Mothers, depicts femininity and maternity; Slavic container for the soul at death; Christian symbol of purity and inspired thought, also the third person in the Trinity, the holy ghost; Egyptian symbol of innocence, associated with the Tree of Life; Greek and Roman symbol of love and renewal, Zeus was fed by doves, also sacred to Athene, Adonis, Bacchus, Venus; Hebrew representation of purity, meekness, gentleness, harmlessness; Minoan attribute of the Great Mother and when paired with the snake, represents air and earth

Eagle: solar symbol; represents sky gods; symbol of ascension, inspiration, victory, pride, strength; when victorious in battles with other animals, represents the triumph of intellect or spirit over physical strength; surmounting a pedestal, emblem of sun gods as sol invictus – victory over darkness; in alchemy, the liberated spiritual part of the prima materia; in ceremony, Amerindian eagle feather headdresses symbolize the Thunder Bird and Universal Spirit, the white eagle is man, the brown eagle is woman; Aztec representation of celestial power, the luminous sky, the rising sun, devourer of the serpent of darkness; Buddhist attribute of Amoghasiddhi, the Fifth Celestial Buddha; Chinese symbol of the sun, yang, warriors, and encourage; Christian symbol of ascension; Greek representation of solar power, attribute of Zeus as his lightning bearer; Roman solar storm bird, lightning bearer of Jupiter; Scandinavian bird of wisdom, sits in Yggdrasil, the Tree of Life, as a symbol of light, also emblem of Odin; Sumero-Semitic symbol of the noontide sun, attribute of Ninurta or Ningvisu, beneficent sun and war god of Canaan and Babylon

Hawk: solar bird; symbol of power, the heavens, royalty, and nobility; an attribute of all sun gods; Egyptian emblem of the soul, the Bird of Khensu, son of Amon-Ra; emblem of Amenti, Great Mother and goddess of the west and the underworld; Greco-Roman symbol of the swift messenger, an attribute of Apollo

Peacock: solar; associated with Tree and Sun worship; the tail represents the blending of all colors and the idea of totality; Christian symbol of immortality and the incorruptible soul; Chinese symbol of the solar, yang, good fortune, attribute of Kwan-yin; Greek representation of the bird-god Puaon; Roman bird associated with Juno and Hera; Hindu mount of Brahma, Lakshmi, Skanda-Karttikeya, and Kama; Japanese bodhisattva Kujaku-mayoo is seated on a peacock

Rooster: bird of dawn, a sun symbol; important symbol of the middle ages appearing on the highest weathervane as a symbol of vigilance

Vulture: dual symbolism of maternal solicitude, protection, and shelter and of death-dealing destruction and voracity; the feminine principle; Egyptian symbol of purification, represents the Mother Goddess, maternity, and love and is associated with Mut, Hathor, Neith, Nekhebet