A Brief History of Castles

In a comprehensive book, Castle, by Garvett, a castle is the fortified private residence of a lord, a home as well as a stronghold. Within the castle, a staff of many was responsible for the needs of the structure itself and the needs of the community inside the walls.
Early castles, built in the 9th and 10th centuries, were constructed of earth and timber. 11th century castle design consisted of an earth mound (motte) and the enclosure or yard (bailey). The motte was built of rammed layers of soil and was topped with a timber tower. The bailey was a large are protected by fence with a ditch around the exterior, fed by stream. A good example of this type of structure is in Pleshy, England. The remains of the 1066 Norman stronghold show a large bailey and motte. These early castle structures could be built in months rather than years like the stone structures that followed. 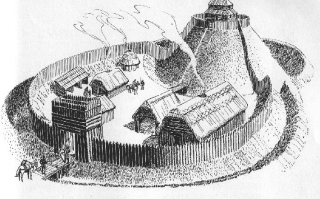 from http://www.castlewales.com
In the 10th and 11th century, the building material and the form of castles changed. Still replaced wood as attackers less easily destroy it. Large stone towers became both the residence and a military building. They were called great towers or donjons. Improvements in castle design allowed for great halls for large gatherings; lavatories called mural chambers or garderobes; fireplaces with flues, built into the walls; and stylistic elements such as Norman or Romanesque arches. Windows high on the castle walls allowed light and air in. Shutters were used in bad weather to keep out the wind, cold, and rain.
Concentric castles were built in the mid-13th century. These structures consisted of rings of stone walls, the lower outer ring being used as a barrier against catapults. The high inner stone ring gave archers an advantage in defending against attackers. Towers within the concentric rings could often be sealed off if attackers breached the outer rings. Castle built during this time often had gatehouses with drawbridges. Additional protection from attack was the addition of the moat that prevented tunneling under castle walls or kept siege machines at a safe distance.
As castles became more prevalent in Europe, design and style unique to each region developed. In France, castles became more luxurious and better fortified. Saumer castle, located on the Loire River, had a courtyard well and underground water tank. A large wooden winding mechanism was used to retrieve heavy buckets of water. Beautifully painted floor tiles and lavish tapestries competed with the elegantly dressed lords and ladies of the court. The outer walls were adorned with flying turrets and machicolations (openings) used to drop materials at attackers.
In Spain, the Moors built square or wedge-shaped alcazabas or garrison forts. Their enemies, the Christian knights, built torres del homenaje or tower keeps. The fortified palace known as El Real de Manzanares was built around 1435 and is a combination of both styles; a square shape with round towers. The stone from the region is reddish-brown in color and looks rugged and earthy compared to the white stone castles of northern Europe.

from http://www.artehistoria.com
German castles were more numerous as many were built by lesser lords and barons. Here the land influenced castle design. Atop hills and mountains, castles could be defended more easily. Large moats or the waters of the Rhine offered protection and allowed for larger windows to be built into the outer walls (see image of Pfalzgrafenstein castle below). Another typical castle structure in the Rhineland is the Randhausberg (translated Edge Mountain). This type of castle was made up of fortified domestic buildings built around the castle tower courtyard. The Teutonic Order of the monk-knights built structures of brick for defense, which housed residential and religious areas. 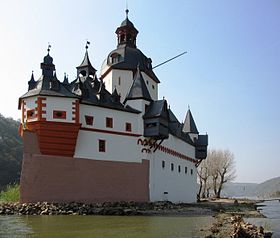 Five sided tower of the Pfalzgrafenstein castle in Pfalz Island in the Rhine river near Kaub, Germany
Strongholds were built in Japan in the Yamoto period (AD 300–700). More prominent wood structures appeared in the 14th century. By the 17th century, Japanese castles were more complex, with many baileys to protect the central tower. They main wooden structure was many stories high with the stone base. To protect against fire, the wood was protected with thick plaster and the gates were covered with iron grates. 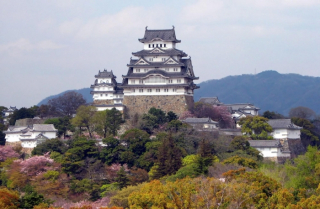 Himeji castle in Japan from
www.tripzilla.com/original-castles-japan/57479
As castles became more complex, a variety of buildings and structures were needed to address the needs of the residents. Chapels were an important part of Christian castles and were elaborately decorated with religious items and paintings. Early on, the soldiers required to defend the castle lived within the walls. Later, knights and soldiers lived outside the walls and used the castle as a base from which to control the surrounding countryside. In the 17th and 18th centuries, castles for used as prisons for common criminals. Before that time, most prisoners held at castles were political or state prisoners and were held for ransom. The people, industry and activity in and around the castle included: cooks, bakers, a wives (women who brewed ale), monks, pages, squires, ladies-in-waiting, laundresses, seamstresses, entertainers, storytellers, musicians, jesters, leatherworkers, woodworkers, carpenters, metal smiths, blacksmiths, stone masons, farmers, beekeepers,  and orchardists.

Throughout the region of Southern Africa, tower myths abound. The building and destruction of towers represents the "folly of human presumptuousness" according to Willis in Mythology: An Illustrated Guide. He offers the interpretation that these stories "serve as a warning to the perils of overambitiousness". Following are two African myths from the Luba people of the Kasai province of Zaire.

At the beginning of time, the village of human beings and the High God was the same. Tired of their noisy quarrels, the High God sent human beings to earth. They suffered from hunger, cold, sickness, and death. A diviner told them to return to the sky to regain immortality. The human beings begin building a wooden tower. When they reached the sky, they loudly beat a drum and played a flute to announce their success and called the others on earth to follow. The High God became angry. He destroyed the tower sending the builders to their death.

Another Luba myth tells of the struggle between Nkongolo and Prince Kalala Ilunga.

Prince Kalala escaped from a pit trap devised by Nkongolo, the cruel Rainbow King. Nkongolo tried many times, using various tactics, to lure Kalala back into his power. Nkongolo sent men to cross the river to kidnap Kalala, but the waters rose up and drowned his men. Nkongolo tried to build the causeway of stone, but the stones resisted his tools. Finally, he ordered a great tower to be built. From the top, he would be able to see into Kalala’s country. After the tower’s completion, Nkongolo commanded the diviner Majibu and a man known as Mungedi to climb to the top of the tower and call the fugitive prince back. Using his magical powers, Majibu leapt into the space and landed in the country of Prince Kalala, where he helped Kalala fight his enemy. The tower collapsed killing Mungedi and the followers of the Rainbow King.

Ancient myths and stories are rich with references to castles, some real and some imagined. Here are a few lesser known mythological castles and towers:

Castle of Corbenic  – medieval legendary castle; those who dwell within have all their heart's desires with the additional status of being the guardians of the Grail

Castle of Darkness – the home of the Black Knight; represents the abode of Pluto

Castle of Insolence – located in the land of Drowsiness of James Thompson's poem; the castle's owner, an enchanter, "enticed passers-by that he might engage them in sensual pleasures" (Jobes 1961)

Castle of No Return – the abode of Caron; inaccessible to living men

Caer Sidi – also known as the Castle of Revelry, Castle of Wonders, Castle Perilous, Grail Castle; a strong-doored, four-square lofty castle of glass, the castle spun around so that no one might find the entrance; grand feasts and revelry went on inside

The Bronze Tower – prison of Danae, the mother of Perseus, who rescued his mother from her captor, Polydectes, using the head of Medusa thus turning Polydectes to stone

The Tower – XVIth card in the Tarot deck; one of the major arcana; a positive card representing progress and positive action; the card's illustration shows a tower being destroyed by lightning which symbolizes the casting out of remaining aspects of the self which prevent essential unity of being

Tower of Xelhua – legendary Mexican tower built by nine survivors of a great flood; led by Xelhua, legendary hero, the tower was built to a great height; it was struck by lightning and all perished

The symbolism of the castle is complex. According to Cirlot in A Dictionary of Symbols, the symbol of the castle is "derived at once from that of the house and that of the enclosure or walled city". In medieval art, walled cities represented the transcendent soul and the heavenly Jerusalem. Castles also represent the “difficult to obtain" and spiritual testing. As castles are often located atop hills or crags, the additional symbol of level or height exists.

The castle and moat are symbolic of physical and spiritual refuge and therefore an especially important symbol during the Crusades. A stronghold of either good or evil, castles usually hold a treasure or a princess (a symbol of enlightenment). As a symbol that houses the unobtainable treasure or an imprisoned person, the castle represent the acquisition of esoteric knowledge or spiritual attainment. To obtain the treasurer to free the prisoner, demanding tasks or heroic struggles must be successfully completed. 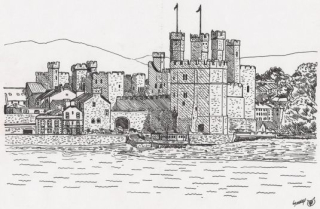 Caernarfon Castle was constructed at Caernarfon in Gwynedd, north-west Wales, by King Edward I of England, following his conquest of Gwynedd in 1283. Drawing by Megalobo.

In Sandplay – Silent Workshop of the Psyche, Bradway and McCoard view the castle as an androgynous symbol. "As a place to live in, it is a feminine image; as a fortress, it is a masculine image." The authors suggest that the use of this symbol may represent the bringing together of feminine and masculine aspects. 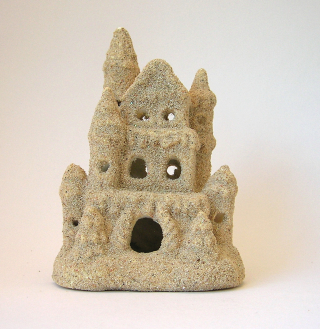 If a client uses a castle miniature, what does the item represent? Of course, much of the answer depends on the particular client, their history, and process. In my sandplay collection, the castle most often used was a sandcastle made to replicate the type of structure one would build at the beach. The sandcastle surface is covered with sand so the miniature is very realistic. Did clients use this particular sandcastle because my practice was in an area close to the coast? Are clients drawn to this castle miniature because of their experience of building sandcastles at the beach? There were many other stone castles from which to choose. Only occasionally were the fairytale castles placed in a scene. If I practiced in a region of the Rhine River in Germany, where castles tower above the river at almost every turn, would clients use castle miniatures as a symbol of protection and power more often? Symbols carry powerful personal and collective meanings. It is always interesting and challenging to decipher and to understand the meaning of sandplay miniatures for individual clients.

The Castle of Lichtenstein, also known as "Castle of the Faerie Tale", is located on a cliff next to Honau in Baden-Württemberg, Germany. Drawing by  Megalobo. 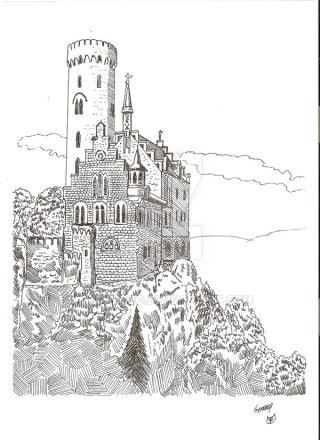