The word equine comes from the Latin equus, meaning horse and includes animals belonging to the family Equidae: horses, asses, and zebras.

Symbol of lunar power when associated with oceanic gods

When ridden by evil entities, becomes a symbol of death

The winged Cosmic Horse represents the sun; when white, symbolic of innocence and life and is ridden by heroes

Buddhist symbol of the indestructible, the winged horse named Cloud is a form of Kwan-yin

In Celtic tradition the attribute of the horse deity, Epona the Great Horse and goddess mare

Chinese symbol of the heavens, fire, yang, the South, speed, and a good omen

Christian representation of the sun, courage, swift passage, the four horses of the Apocalypse are war, death, famine, and petulance

In Greek mythology, symbolizes the humid principle when associated with Poseidon as his sacred animal, and as Pegasus, carries the thunderbolt of Zeus

Irish legendary magic spirit horse, the Pooka, was an omen of death

In Indian tradition, the white horse was Kalki Avatara, the final incarnation of Buddha

Japanese form of Bato Kwanno, goddess of mercy and the Great Mother; a black horse is the attribute of the rain God

In Roman mythology, white horses pulled the chariots of Apollo and Mithra; attribute of Diana, the huntress

Sacred to Oden as the eight legged mare, Slepnir

Shamanistic symbol of passage from this world to the next

Sumero-Semetic emblem of Carthage, appears on bas-relief and coins

In Taoist tradition, an attribute of Ch’ang Kuo, a Taoist genie

As a beast of burden, represents poverty

Buddhist symbol of austerity and humiliation

In Christian tradition, sacred animal of Christ, symbol of the flight to Egypt, the entry into Jerusalem, emblem of St. Germanus

Egyptian symbol of inert power, evil, emblem of Set as destroyer in his typhonic aspect

In Greece, represented sloth, infatuation, sacred to Dionysos and Typhon as a brutish aspect, sacred to Priapus as a protective principle, sacred to Cronos

Hindu mythological beast which pulled the chariot of Ravana

In researching zebra symbolism and myth, I was able to find an African folktale “How the zebra got his stripes”. You can easily find this tale with an internet search. I was wondering, since the zebra is a black and white striped animal, perhaps it could be a symbol of dualism. Could it represent a protector? Other plains animals will graze with herds of zebra because zebra will often alert the animals to danger. I imagine there must be more African myths or ceremonies about the zebra as it is an integral part of life on the plains. The Songye people of Central Africa, wear striped masks to be worn by males for ceremonies related to social control, exorcising negative forces, and enforcing allegiance to the rulers.  Female masks reflect positive forces and are typically worn at night during lunar ceremonies.

“Zebras also represent awareness and self-protection. It is believed when an individual has an encounter with a zebra whether in waking life or through a dream, significant change is on the horizon and important information is ready to surface. Zebra encounters can also signify the individual's need to be aware of their current situation and surroundings in order to make necessary changes. The zebra represents the dual aspects of ying and yang energies, sending the message that every aspect in life requires balance.

Zebras are always on guard and are keenly aware of their surroundings, ready to blend in with the scenery at a moment's notice in order to avoid confrontation with predators. Zebras are unable to sleep unless another herd member is awake and standing guard. These aspects symbolize the human need for protection and partnership”  From www.reference.com 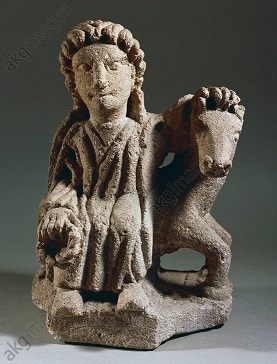 Epona Stone statuette, 2nd century AD
Museum of Alesia, Alesia
Ancient Celtic tales are found in early welsh literature, known as the Mabinogion, which is separated into Four Branches. In the First and Third branches, in the stories of the family Pwyll, Epona is linked with Rhiannon, the Great or Divine queen.
The name Epona (Great Mare) is from the Gaulish language, spoken by the Celtic inhabitants of Gaul (modern France and Belgium).
Possibly initially a river or spring goddess, conceived as a spirited steed, Epona became a Celtic mythological deity and great queen of the underworld. She was also associated with the everyday. As the giver of plenty, she was patroness of mares and the protector of foals. Epona is usually depicted riding a mare, with other mares and their foals.
In the final Gaelic conquest in 45 BC, the Roman calvary took her as their own. Epona was the only Celtic goddess to be celebrated with a festival in Rome.