Artemis – Greek moon goddess, virgin of the hunt, protectus of maidens; daughter of Zeus; wild goat was sacred to her 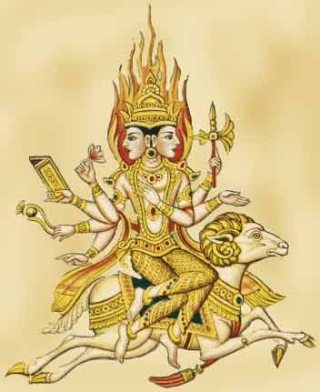 Baphomet – medieval idol or symbol of the mystic rites of the Knights of Templar; sometimes portrayed as a goat 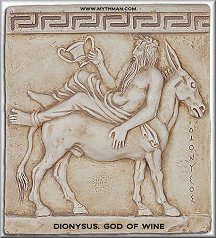 Dionysos – Greek deity; the goat was an attribute or form of Dionysos; sometimes depicted wearing a goat skin

Ea-Oannes – Assyrian fish deity; Lord of the Watery Deep; associated with the goat or goat-fish

Faunus – Roman son of Picus; ancestor of the fauns; god of shepherds; goats for sacrifice to him; identified with the Greek Pan 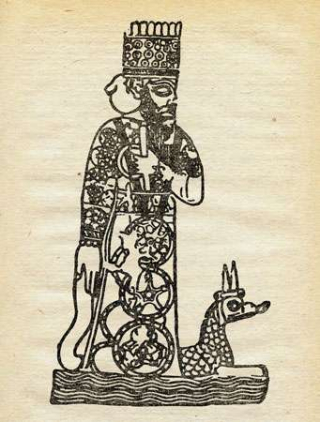 Marduk – Sumero-Semitic; originally a god of the spring sun who became a supreme god of the Assyrian and Babylonia pantheons; son of Ea (sea god); Marduk created heaven and earth and placed the 12 mansions of the zodiac in heaven; also known as Bel; one of his attributes was the goat.

satyrs – one of the race of woodland spirits; half goats with goat horns and tail; originally represented the wisdom of fertility; later symbolized abandon and folly; also represented unbridled lust

witches – in late Middle Ages, were "portrayed as being transported through the air on goats. In these representations the devil appears usually as a male goat whose rump the witches kiss” (Biedermann, pg 153). 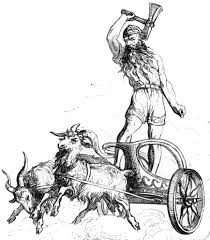 Goat blood – in ancient Scotland, a cross is dipped in goat’s blood and set on fire to call the clans to war

Goat gallbladder – African symbol of honor, placed in the hair

Goat reins – in ancient funeral rites, black goat reins were sacrificed and given to the dead man as a viaticum to assist his resurrection

Ride a goat – part of an initiation into a secret society, often done with humor

Scapegoat – to bear blame; among Jews of antiquity a goat was used. “Over its head on the Day of Atonement the high priest confessed the sins of all people, thus placing them on the goat, after which it was driven into the wilderness as propitiation to Azazel" (Jobes, pg 666).

Separate sheep from goats – separate good from evil, from the Last Judgment 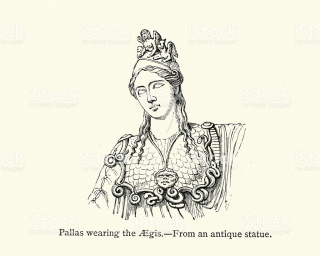 Jobes describes the aegis as "the skin of the goat which acted as Zeus’s foster mother and, by Hephaestus, made into an invulnerable breastplate or shield for Zeus. Zeus lent it to other deities and finally gave it to Athena" (pg 38). Jobes goes on to describe the aegis as "a goat skin covered with dragon scales, bordered by serpents, and had the head of the Medusa attached to it, all symbols of fertility and growth.

The origin or use of goat skin as an item of clothing is discussed by Beidermann, "The divine robes of Pallas Athena include the original Greek ‘aegis’, the skin of the female goat, which according to  Herodotus [IV, 189] was a garment worn by Libyan women and (along with the Olive tree, which was sacred to Athena and imported from Libya) suggest the North African origins of the goddess" (pg 152). Cooper states that the aegis represented "protection; preservation; fecundity. The aegis was worn, while the shield was carried" (pg 10). The aegis was worn by Minerva, Italian goddess who is "represented in art as grave and majestic, wearing a long robe, bearing the aegis on her breast, armed with helmet and spear" (Jobes pg 1106). 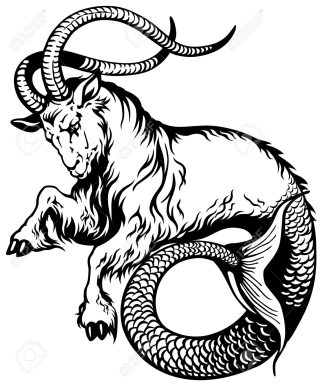 The 10th sign of the western zodiac is Capricorn. "Its dual nature, expressed allegorically in the form of a goat whose body terminates in a fish’s tail, refers to the dual tendencies of life towards the abyss (or water) on the one hand, and the heights (or mountains) on the other; these two currents also signify, in Hindu doctrine, the involute and evolute possibilities: the return to or the departure from the ‘wheel of rebirth’ (that is, the Zodiac)." (Eberhard, pg 38).

The goat has a broader symbolism aside from the zodiac sign of Capricorn. As with most symbols the goat has positive and negative symbolism. The goat represent agility, fertility, generative heat, reproductiveness, sociability, abundant vitality; also lasciviousness, poverty, stench, stupidity, and winter. In some traditions, the goat symbolizes the masculine principle and the reproductive powers of the sun. "The goat typifies foolishness in the valley, but that which is far-seeing and sure footed when on the mountain" (Jobes, pg 665).

The dream significance of a black goat is inconstancy in love; a white goat represents coming misfortune. In heraldry, the goat is the symbol of "the warrior who wins a victory by diplomacy or policy rather than by physical valor" (Jobes). In the northern sky the constellation Capricornus is also known as the Horned Goat. According to Jobes to goat is "in various European languages called gat, ged, geit, get, goot, gote, the radical of all being ‘at’ Egyptian for goat, which also meant heat. In Sanskrit the word is aga," which yields might A, which means mighty sun.

In China, the goat represented yang and is guardian of the direction south, southwest, and west; the hours one to three p.m.; and Wei, the eighth of the twelve terrestrial branches. The goat also symbolizes the good and peace.

In Christianity, the goat "symbolizes those damned in the last judgment…[and is] shown to distinguish sinners from the righteous" (Jobes). The scapegoat is Christ burdened by the sins of the world. The goat is also a familiar of witches and a form of the devil. The goat represented sharp hearing in Egyptian and Hebrew symbology. Early Hebrews considered the goat to be clean and therefore sacrificed goats to Jehovah to atone for sins. "In Greek mythology a goat nursed the infant Asclepius. The aegis of Athena was made from the hide of Amalthea, that she-goat which had nursed Zeus" (Jobes). The goat was also a form of Dionysus, the god of the grape harvest, winemaking, and wine. Pan had the ears, horns and limbs of a goat. The Minoan god of the waning year was the goat. 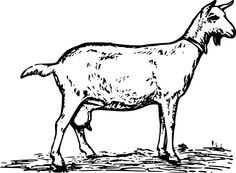 As I review photos of clients’ sandplay scenes, the most frequent use of the goat is its placement among other farm or domesticated animals in several children’s scenes. I am aware that the children may have access to several petting zoos whose main attraction is usually an active and hungry heard of small goats. Is the use of the goat in their scenes a reflection of their possible interaction with goats at petting zoos, their association with typical farm animals, and/or a representation of a deeper symbolic meaning? As I recall the cases associated with the sandplay scenes, there are other more dominant themes and miniatures in their sandplay. As I research information for goat symbolism, I generate more to think about than answers to my questions.