Chinese Symbolism of the Hare

According to Chinese mythology, the hare is the fourth creature in the zodiac that leads the sun through the twelve terrestrial branches of the zodiac and resides in the moon.  Called tu-z, the hare is the governor of Cancer, the direction east, and the hours 5 to 7 a.m.

The hare represents Fang in the eastern quadrant and is depicted with mortar and pestle as it pounds cinnamon twigs, the symbol of longevity. Also known as Jade Hare, "the lunar festivities [are] held on the 15th day of the 8th month. It expresses the wish that the children...will rise in the social scale and enjoy a peaceful life" (Eberhard, pg 140). The hare "was the second of the twelve emblems of the Emperor of China, symbolic of the Yin force in the life of the monarch...considered an animal of augury" (Cirlot, pg 139). 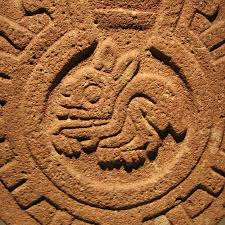 The rabbit was the Aztecs’ favored creature of the hunt and was identified with the Chichimecs, the hunter-gatherers, and the patron hunting god, Mixcoatl, also known as the “cloud serpent”. The rabbit was also the ancient Mesoamerican symbol of the moon and is depicted in the art of Pre-Hispanic Central Mexico, Classic Mayan, and ceramic Mimbres art of the American southwest.

According to Miller and Taub, “In Postclassic Central Mexico, the rabbit was also closely identified with the intoxicating drink PULQUE. This association is well documented in the day name Tochtli, meaning rabbit in Nahuatl. The patron of Tochtli was MAYAHUEL, the goddess of MAGUEY [agave plant] and by extension its principle product, pulque. Moreover, the many PULQUE GODS were known collectively as the centzon totochtin, meaning 400 rabbits, or by the calendar name Ome Tochtli, or 2 Rabbit” (pg 142).

pulque: alcoholic beverage made from the fermented sap of the maguey (agave) plant

Nahuatl: 1. the Uto-Aztecan language of the Nahuatl 2. a member of a group of peoples native to southern Mexico and Central America, including the Aztecs 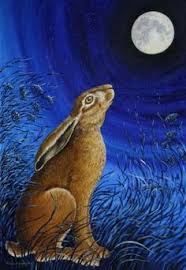 According to Native American Algonquin myth, Michabo is the “Supreme deity, Creator of the human race. He was a shape changer who created man by mating with a muskrat" (Miller & Taub, pg 169). His messengers were the Gijigouai, the sun deities. Michabo was derived from missi, meaning great and wabos meaning rabbit; also known as Giant Rabbit, Great Hare, Messibizi, Messon, Missabos, and Missiwabun.

"Spirit of the eastern light; dispeller of darkness. Lord of winds, prince of air, his voice was thunder; his weapon was lightning" (Jobes, pg 1098). Michabo’s grandmother was the moon, his father the west wind, and his mother was the Virgin of dawn. Born fully-grown and mighty in strength, Michabo had all the knowledge possible to obtain, a characteristic of sun deities.

Michabo was in on-going conflict with his father, Kabun, who lived in the realm of darkness. Michabo married muskrat, who journeyed to the bottom of the sea and returned with a speck of mud out of which Michabo created the earth. Michabo is the originator of religious rites, interpreter of dreams, and the inventor of picture writing. He provided maize and spoke to hunters in their dreams to direct them to fish and game. He is the prototype of Brer Rabbit in Uncle Remus stories.

When I was very small we had a huge (to me) rabbit kept in the hutch in the backyard. I only remember the fact that she was very big (in the eyes of a three-year-old). I never handled her and was somewhat wary of her teeth.

When my daughter was in elementary school, she had a variety of pets; one of which was a dwarf rabbit with soft tan fur. She named the rabbit Bun after her favorite stuffed toy. Bun was often let out of the cage and even taken outside, on a special halter leash, to hop around the backyard. She was a delightful addition to the menagerie and much more conducive to holding than the fish and garter snakes.

Deities Associated With Hares and Rabbits

Eostre (Anglo-Saxon) – in antiquity, worshipped in a spring festival; "Also known as: Eastre,  Goddess of the Spring. Protectress of fertility, goddess of rebirth and friend to all children. To amuse children, Eostre changed her beautiful pet bird into a rabbit. The rabbit brought forth brightly colored eggs, which Eostre gave the children as gifts" (Miller & Taub, pg 169).
Freya (Norse) – emblem of Freya, a mother goddess, giver of fruitfulness and love; associated with Holda, the Norse moon goddess
Hermes (Greek) – God of the spoken word; the rabbit was sacred to Hermes as a fleet-footed messenger
Wenenut (Egyptian) – "Deified rabbit-headed goddess. Wenenut is the female counterpart of the hare-headed God, Weneu. In some texts, Wenenu is identified as a form of Osiris [who] is depicted with a knife in each hand, although she is seen with the ankh and the scepter (Miller & Taub, pg 169). 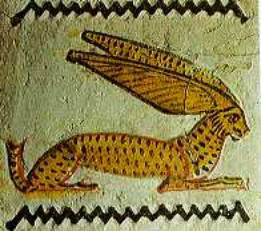 Miller, M. & Taube, K. (1993). An Illustrated Dictionary of the Gods and Goddesses of Ancient Mexico and the Maya. London: Thames & Hudson. 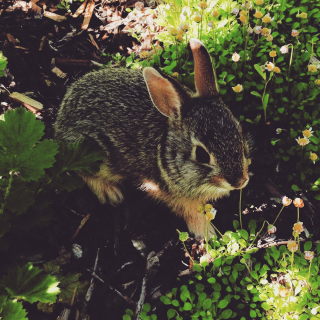 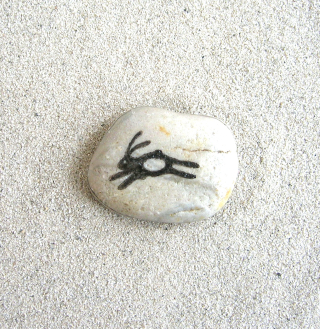 Hare n – a fast-running animal that resembles a rabbit but is larger, has longer ears and legs and does not burrow. Genus: lepus

Africa – symbol of bad luck; hunters will return home if a hare crosses their path; trickster hero who gets the better of the lion by tricking the lion to eat a hot stone; positive symbolism – embodiment of experienced wisdom and shrewd benevolence; Bushman legendary messenger of the moon, who falsifies

Chinese and Japanese legend – "supernatural creature of auspicious omen that inhabits the moon, where it pounds with mortar and pestle, the elixir of life" (Jobes, page 725)

Christian – symbol of Easter; symbolized fecundity and lust; a white hare is sometimes placed at the foot of the Virgin Mary to indicate her triumph over lust

Egyptian – an attribute of Osiris, symbolic of open eyes; "in the Egyptian series of hieroglyphs, the hare is the determinative sign defining the concepts of being, and symbolic in consequence of elemental existence" (Cirlot, PG 139)

Folklore – identified with the god of the underworld

Germanic – associated with the goddess Harek

Heraldry – one who enjoys a peaceful and retired life

Japan – called うさぎ (usagi) symbol of the sunrise and gratitude

Mythological – hare is sacred to the moon

North American – legendary holy animal "which burrowed away the soil and released the primeval race from the underworld" (Jobes, pg 1316); giver of luck in the chase

Rabbit Hunt – "Zuni fertility ceremonial. Children conceived on the night of the hunt supposedly would be exceptionally vigorous" (Jobes, pg 1316)

The Private Life of the Rabbit 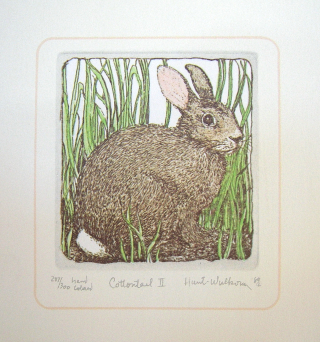 The following is an excerpt from the introduction to The Private Life of the Rabbit by R. M. Lockley.

The rabbit has a baby face, of rounded outlines, snub nose, enormous ears and eyes, and an appearance of helplessness. Konrad Lorenz has suggested that it is because of these attributes of infancy, this facial resemblance to the young human, that we – women and children especially – are pleased when we gaze at a rabbit.

The rabbit is vegetarian, timid, retiring. It may raid the vegetable plot, but it does not attack man or man’s domestic animals. Its little excursions to nibble carrots, lettuces, peas, are tiresome, but, unlike the misbehavior of children whom we nevertheless love, can be corrected by our own watchfulness. Like children, the rabbits in the garden, field, and hutch endear themselves to us by their innocent, happy preoccupation with their simple way of living. Small wonder that in the traditional nursery tales the rabbit is both enfant terrible and the lovable character. Beatrice Potter and a hundred other authors have created the acceptable image of careless, cheerful, clever Rabbit. Those enchanting Little People, the gnomes, goblins, elves and pixies have long rabbit-like ears. Uncle Remus’s Brer Rabbit always wins in the battle of wits with Brer Fox.