Twins: The Power Of Two 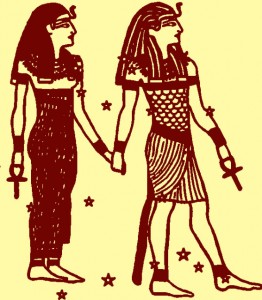 In Egypt, Gemini was symbolized not by twins, but by a woman and a man holding hands. In Sanskrit, they were called Mithuna or Maithunia.

In Roman mythology, they were Apollo and his sister Diana. In Babylonia, twins of indefinite gender were known as Mastabagalgal. Patriarchal revisions told of male twins, the Dioscuri, Castor and Pollux. Previously, old myths told of androgynous twins and twin parings of Gods and Goddesses, spouses, and mother-child. An androgynous view of the heavily Twins is more accurate as an interpretation of the union of the opposites, much like the yang and yin symbol.

The Mother of Time, also known as the Two Ladies, symbolizes the transitional gate of midwinter, looking both backward and forward. She rules the Celestial Hinge at the back of the North Wind around which the universe revolves.

The cycles of nature were renewed by the Egyptian Vulture Goddess, Nekhbet, and the Serpent Mother, Uatchet, archaic Goddesses known as the Two Mistresses. All pharaohs ruled by their authority. 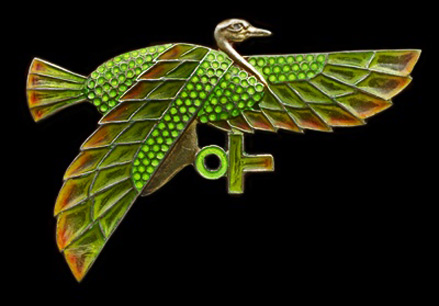 Near Delagoa Bay, in southeast Africa, the Baronga tribe believes twins influence weather. The name Tilo is given to a woman who bears twins and her infants are called children of the sky. These women are responsible for performing a series of rituals to bring down the rain in times of drought.

The number two, embodied in myths as twins or the aspects of twin-like gods or goddesses indicates universal beliefs regarding the power of two and “two” symbolism related to duality, transition and new beginnings, cycles, and the ability to influence nature as numbers are thought to be an integral part of the harmony of the universe.

The Number Two: In the Larger World and the World of Sandplay Part 1

According to David Fontana in The Secret Language of Symbols, “Number are far more than a convenient measure of the physical world. In many traditions they are considered to be the primal organizing principle that gives structure to the universe.” Many believe numerical relationships govern the lives of animals and plants, influence seasonal cycles, are the templates of creation, and dictate the movement of the planets. Universally believed to hold magical powers or sacred attributes, numbers are a part of many cultures and belief systems, with the number two having both historical and current significance. In researching the number two, I was curious how “two” might appear in sandplay and what “two” might represent.

In Gertrude Jobe’s Dictionary of Mythology Folklore and Symbols, the number two is defined as active and passive, woman and man, summer and winter, good and evil, heaven and earth. Two also symbolizes change, creation, duality, and marriage. Jobe lists kinds of twos and their meanings as follows:

Often in sandplay work, clients will use two of the same object or choose items or miniatures that represent “two” and its symbolic meaning. After an interesting and informative discussion with Harriet Friedman, Jungian analyst, at a sandplay consultation group, I found my curiosity peaked. I began to use the information presented to the group to understand ways in which clients use “two” or its many symbols to express the essence of “two” in the tray. My research on the number two and the understanding of “two” in the tray shared by Harriet coalesced and led to new perspectives and insights regarding sandplay.

Two objects intensify the meaning of a single object and has seemed to me a simple explanation of clients’ trays. Yet, there is so much more to “two”; representation of unification of the opposites through the transcendent function, the emergence of something new, the transference and countertransference, duality, and the tension of the opposites.

Clients may use a bridge or create a path or road to connect two parts of a tray or two scenes. According to Kay Bradshaw and Barbara McCord in Sandplay – Silent Workshop of the Psyche, this represents the client’s process of transformation leading to unification of the opposites with the bridge as a “physical manifestation of the transcendent function.” Connecting two parts of the tray, two parts of one’s self, may indicate transformative energy and the unification of opposites.

(continued in The Number Two: In the Larger World and the World of Sandplay Part 2)

Bibliography at the end of Part 2.

The Number Two: In the Larger World and the World of Sandplay Part 2

(continued from The Number Two: In the Larger World and the World of Sandplay Part 1)

Two items or pairs, such as a bride and groom, may represent two coming together to indicate the emergence of something new. Symbolically, the number two is woman and man and out of that union emerges a child; something new.

The relationship with the therapist may be represented by the relationship between figures or objects in the tray. According to Kay Bradshaw in her article Transference and Countertransference in Sandplay Therapy the placement of miniatures or items may “express the simultaneous character of actions and reactions in the client-therapist relationship involving both conscious and unconscious as well as positive and negative feelings by both people.” Ruth Ammann in The Sandtray as Garden of the Soul, discusses the concept of countertransference in sandplay. She states “…the therapist enters the therapeutic process of his analysand or client by resonance.” This resonance comes from training, life experience, and an ability to work with nonverbal methods such as sandplay.

Two may represent the duality of good and evil. In the tray, this duality may appear as two figures such as a white knight and a black knight, a wizard and a warlock, or a princess and a witch. Animals such as a dragon and a unicorn, a hawk and a dove, or a white horse and a black horse may be used to symbolize good and evil.

The tension of the opposites might appear in a tray as items placed at far corners of the tray. Items used in this way may represent opposing qualities that may need to be realized.

This is but a brief discussion of the possibilities regarding the number two and what it may symbolize both universally and specifically to the sandplay process. I am grateful for other sandplay therapists and their ability to record and present their thoughts and experiences regarding sandplay as it has enhanced my understanding of “two”.

Fontana, David, The Secret Language of Symbols, A Visual Key To Symbols and Their Meanings, Chronical Books, San Francisco, 1994

The Power of Two Part 1

To understand the power of two, we can look to ancient cultures and their depiction of doubles, bi-lines, two headed images, and summer/winter duality. These motifs or images were used to express intensification, potency, and abundance.

Doubles appear on painted vases as far back as 4500-3500 B.C. in the form of two images such as animals or egg shaped ovals. Double pairs of snakes can be found on ivory seals from the Middle Minoan period, early 2nd millennium. The many double-egg-shaped buttocks of sculptures, reliefs, and engravings from some 20,000 years ago, may represent intensified potency and fertility. Some female forms are also created with pairs of snakes across the abdomen and buttocks and may symbolize supernatural potency expressed by the doubling device, "the power of two" according to Marija Gimbutas in The Language of The Goddess.

The double fruit or double grain motif may represent plant fertility in relation to the Divine Feminine. A glyph of two ellipses joined at one end was used on seals and megaliths throughout Old Europe. This image is often paired with the tree and sprouting bud in Middle Minoan ceramic art.

Two lines or bi-lines have been used on figurines to symbolize the power of two as intensified fertility and potency as it often appears across the breasts, abdomen, and buttocks. Bi-lines also appear on the face and arms of figures of the Goddess. An ancient clay stamp with incised lines, from 5800-5500 B.C., represents the alchemical process of two coming together to form many.

(continued in The Power of Two Part 2)

The Power of Two Part 2

(continued from The Power of Two Part 1)

During the Neolithic and Copper Age, many two-headed figures or “mother-daughter” figures were created. These figures may represent the Bird Goddess in her major and minor aspects, or a mother-daughter pair, or two sisters. In such figures the power of two may intensify the essence of the goddess.

Summer/winter (cycle of nature) duality is evident in an ancient shrine (c. 4000-3600 B.C.) discovered in northeastern Romania in 1970, near the village of Ghelaesti. The arrangement of figures and vases may have been instrumental in seasonal fertility rites. The figures had parallel line patterns over the bodies. Vases were decorated with snake spirals symbolic of double fruits/seeds. Other vases were painted with snakes flanked by egg and seed symbols. The vases are all decorated with the power of two theme of repetition to invoke and express fertility. The concept of summer/winter duality is also represented by the cardinal placement of the figures within the shrine. 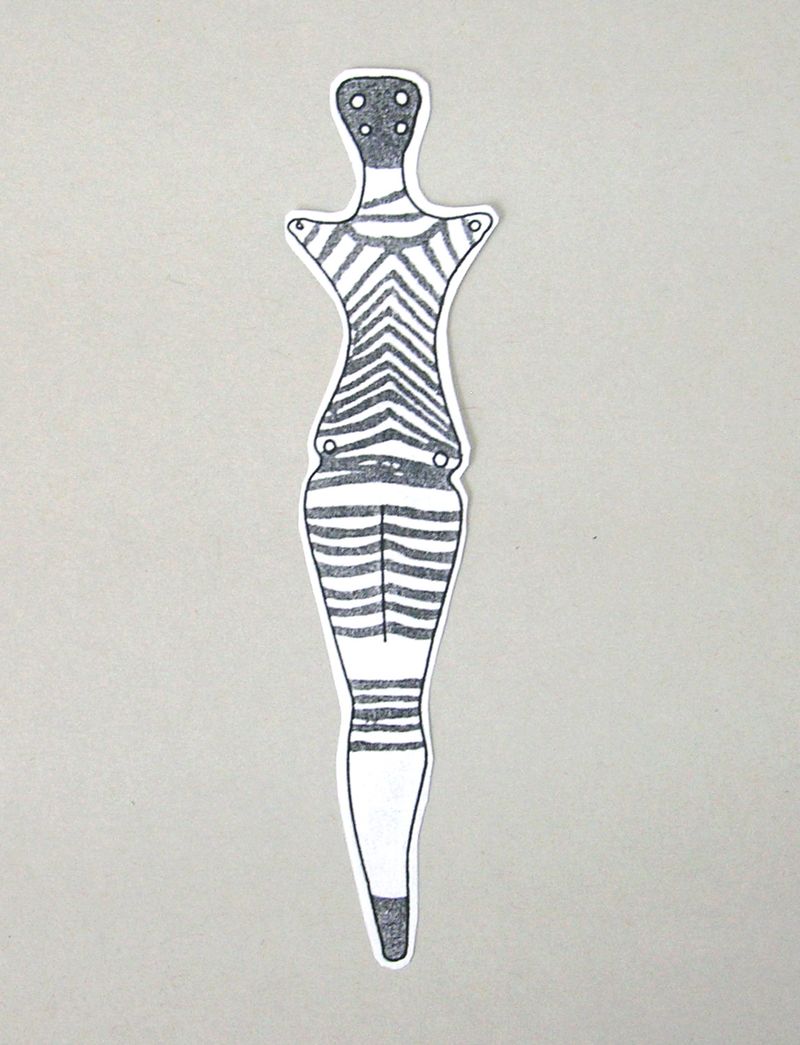 Figure from shrine at Nedeia with black painted head and feet, the body is decorated with chevrons and parallel lines, NE Romania (Gimbutas, 1989)

The power of two in the above examples also meant multiplication, growing, and flourishing. Two lines, two images, two figures; all represented intensification, increase, and abundance. 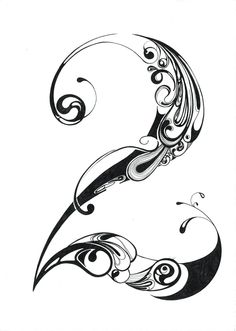 According to J.C. Cooper in An Illustrated Encyclpaedia of Traditional Symbols, numbers have represented for many traditions and cultures an organizing principle from which all things originate and are the basis for the underlying harmony of the universe. The number two is a symbol for both balance and the passage of time.

The Chinese system of numerology is based on the number two as it represents the dual nature of the cosmic forces yin (female) and yang (male). Taoists believe yin and yang are forces which are in opposition and yet complementary. An even number, two is terrestrial and mutable. Two is the Buddhist symbol of duality of samsara; female and male, theory and practice, wisdom and method. The number two in Taoist belief is The K’ua or the Two Determinates, the yin and yang.

In Roman myth, Janus (son of Apollo) is a two headed god who looks in both directions and to whom all gateways are sacred. Janus is associated with beginnings; sunrise, sunset, and each season. To this day, January 1 is a day to look both forward and back and to reflect on the new year. 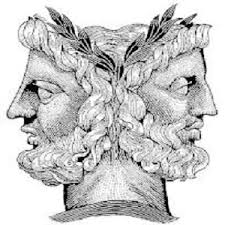 Pythagoras, who believed “everything is disposed according to numbers”, stated that two is the first number of the female principle.

Hindu belief states that numbers are the primary substance of the universe. Two represents duality or the shakta-shakti.

Simply stated, the Kabbalah is a complex system of symbols used to understand the spiritual dimensions of the universe. Each letter of the Hebrew alphabet has a number associated with it. The Kabbalistic sefirah, Hokhmah, symbolizes wisdom. Two is the Hebrew symbol of life force.