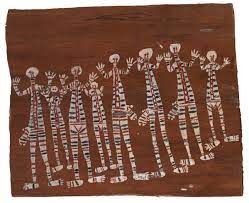 Most Australian tricksters are benign but there are those who create chaos and sickness. The Ngangjala-Ngangjala and the Wurulu-Wurulu often disrupt or subvert the ancestral order. The Argula are tricksters related to sorcery. The tricksters known as the mimi can inflict sickness, while the Namorodo are more sinister. The Ngangjala-Ngangjala and the Wurulu-Wurulu tricksters wander through the bush looking for mischief and creating chaos. They are the reason people fight and steal. They themselves steal food and ruin the harvest. They paint images of themselves over ancient cave paintings of aboriginal culture heroes. The Ngangjala-Ngangjala are often seen in the clouds during monsoon season. They also appear as a mist raising from their own cook fires, where they have been cooking stolen food.

The Argula punish anti-social behavior,. Images of the Argula are painted on dwellings to inflict disability or death. The mimi are depicted as long slender spirits who live in the cracks of the Arnhem Land escarpment. If surprised by humans wandering the cliffs, these spirit tricksters become angry and cause sickness. So, travelers near the cliffs shout out to the mimi to warn them of their presence. The mimi live and sing within the rocks and can be heard at night tapping out the rhythm of their songs.

The Namordo “who are so thin that they consist of skin and bones held together by sinew, are particularly feared. They travel at night, making a swishing sound as they fly through the air, and may kill with one of their long claws anyone they hear“ (Willis, 1998, p. 285). Anyone who is sick or injured is vulnerable to their actions. The Namordo can capture the spirit of the dead, preventing it from joining its ancestors. The dead spirit then wanders the bush creating chaos.

I once had the pleasure of traveling in the state of Idaho. I took the scenic route (how could any part of Idaho not be a scenic route?). I drove 1,250 miles in three days. From Boise, I drove northeast on the Ponderosa Pine Scenic Byway through the Sawtooth Mountain wilderness area, then south through Sun Valley, and then west back to Boise. The next day, I traveled north following the Payette River to Coeur d’Alene, then west to Spokane, then south through an area known as the Palouse, then back to Boise. Words such as picturesque and spectacular cannot fully describe the geography I saw.

Deer and coyote caught me by surprise as I rounded the corners of the mountain roads. Magpies, western bluebirds, and hawks perched on fence post on the side of the road. If I had stopped at each awesome site, I would not have covered so many miles. With so much quiet time and so many miles, I wondered about the rich Native American Indian heritage of the area. The Coeur d’Alene Indians have many stories related to their life on the plains and plateaus. Following is the story of Coyote and Moon.

Coyote is originally chosen by the first humans to be the Moon, but they become dissatisfied because he takes advantage of his position in the sky to watch people on earth and divulge their secrets. He is replaced in the sky by Old Man Chief, SpoxanitcElt, who travels about the world inspecting things Coyote has left undone. Coyote becomes angry because Sun has killed some of his children. He cuts out Sun’s heart, and at once the earth becomes completely dark. Coyote attempts to carry Sun’s heart home but the dark keeps falling. Finally he realizes he is getting nowhere. He put Sun’s heart back and light returns to earth. (Gill & Sullivan, 1992, p. 55)

Idaho is truly a beautiful state. I enjoyed my sunrise to sunset drives. Had I known coyote was responsible for lighting my way and illuminating Idaho's beauty, it would have only added to my pleasure. 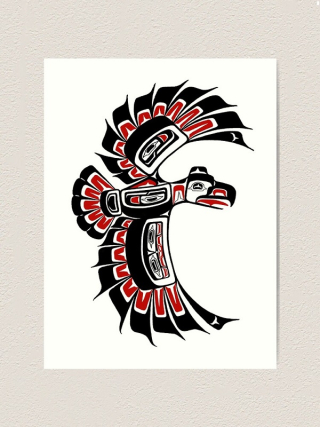 Raven appears in Northwest Coast and Arctic story cycles as a trickster who is responsible for assisting humankind. He is responsible for bringing light to the dark world, creating and transforming of parts of the earth, naming plants, and teaching animals. Raven is also known for being deceptive and untrustworthy. Following are stories about Raven.


Tsimshian - southeastern Alaska and British Columbia
The parents of a dead boy invite all the animals to their sons wake. The boy's father, who is the chief, orders the boy's intestines to be removed and burned. Upon visiting the boy's body the next morning, the mother finds a young man, bright as firelight. The young man becomes ravenously hungry, eating everything in sight. The chief sends him away from the village with a blanket decorated with raven feathers. He puts on the blanket and flies over the sea. He cannot see because ma, a copper disk, is hidden away. The young man disguises himself as Raven and steals the copper disk. When the other animals refuse to share their food with Raven, he breaks ma in a tantrum and light comes to the world.
Tanaina - sub arctic
Raven, known as Guguyni, releases the sun and moon from captivity so the people can see.
Nooksak, Salish - northwest United States and British Columbia
Raven was watching the children of the North Wind People, the supernatural guests who visit villages and bring the snow. Raven carelessly lets one of their children fall into the fire. When the North Wind People learn of this tragedy they leave the village quickly. This tale explains why the winter always leaves so suddenly.
Nootka - Vancouver Island and Olympic Peninsula
Raven learns that Crow, who owns the fresh water, will not give anyone water unless she is paid. Many people are dying of thirst. Raven meets with the chiefs who will make Raven chief over all of them if he will get the water. Raven goes to Crow’s house and pretends to be dying of thirst. Crow lets Raven in. He casts a sleep spell on her. Raven then tricks her through humiliation and demands that she give him water. Crow then goes to the box where she keeps the water. Raven tips the box over, letting the water flow over the land forming a lake and a stream. Raven then takes some of the water and flies all over the world creating rivers.

A trickster is a character in a story who exhibits a great degree of intellect or secret knowledge and uses it to play tricks or otherwise disobey normal rules and defy conventional behavior.

In researching the topic of tricksters, I found it most interesting that the majority of stories involving these characters predominately came from Native American and African cultures, and often appeared in animal form. If, according to C.G. Jung, tricksters were the preservation of the shadow in pristine form, then I am grateful for these delightful characters and their often mischievous ways.